Is Pet Wants a Top New Franchise? Pet Wants franchise is a subscription pet food company that makes monthly deliveries of all-natural, fresh-made grub.  Franchised in 2015 by founder Michele Hobbs and funded by the Franchise Funding Group of Dan Murphy and Gary Green.
(Top New Franchises)   What do you think?  Is the Pet Wants a good franchise to own?  Share your opinion below.

According to a March 2016 article in Entrepreneur magazine, Dan Murphy (The Growth Coach franchise) and Gary Green (Fresh Coat painting franchise) explained why the Pet Wants was chosen as the first concept they chose to finance through their new Franchise Funding Group: 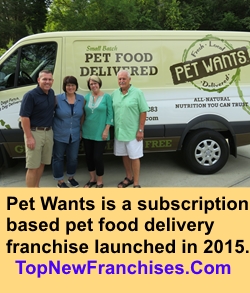 The founder, Michele Hobbs, had that X factor.

She wanted to expand nationwide but just didn’t know how.

She kept asking, “How do I successfully franchise my business?” and it turned out we were the answer. She wasn’t going to be denied.

We looked at the due diligence, and she was in a great niche — fresh pet food.

She had determination, grit and great selling skills.

She had a proven system and was just looking for a partner.

We started offering franchises in June 2015, and in less than five months sold 19 franchises, with eight up and running and 11 in the process of launching.

Are you the Pet Wants franchisor?  Contact us about sponsoring this page.

WHAT DO YOU THINK OF THE PET WANTS FRANCHISE?  TOP NEW FRANCHISE… OR UNTESTED FLASH-IN-THE-PAN?