(TopNewFranchises.Com) Melanie Erwin was born and raised in Phoenix, Arizona and has a degree in accounting.

Nasir Mahmood grew up in Pakistan, and is a mechanical engineer by trade.

Mike & John Atleski both grew up in Detroit, and have diverse backgrounds in the automotive and hospitality industries.

Evo Chakaroff came to the U.S. from Bulgaria 10 years ago with a passion for healthy foods and healthy lifestyle.

Q. What does this diverse group have in common?

A. They each decided to pursue their American Dreams of business ownership as Kwench Juice Café franchise owners… and they are loving it. 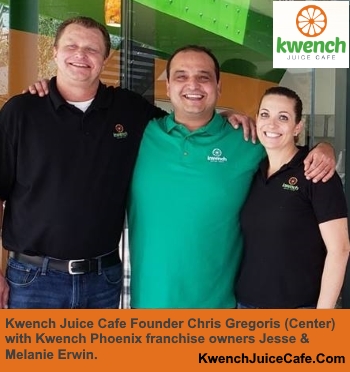 “Of course they are loving it,” smiles Chris Gregoris, the franchisor and pied piper of the growing band of Kwench business owners. “What better business could you own than one that makes people happy… and healthy?”

Gregoris knows the ins and outs of business ownership. In the decades before he founded Kwench, he opened, owned and operated retail concepts including coffee, yogurt and even popcorn shops. His years of trial and error resulted in the franchise concept he considers his masterpiece: The Kwench Juice Café franchise. His Boston-based chain is just getting started, but already has a growing number of locations sprouting up in the Northeast, the Midwest and the Southeast United States.

“Over the years I’ve learned that the single most important element in building a successful franchise chain is recruiting the right people as franchise owners. I started Kwench with the understanding that our owner operators must be genuinely passionate about achieving their own success by making customers happy,” says Gregoris. “You can only teach that to an extent. They must be the kind of people who will take pride in creating a perfect, delicious product and maintaining a friendly, clean store. That’s what our owners have in common – and you can tell as soon as you walk into their stores.”

The other keys to success?

Affordability is key, says Gregoris. He has worked to keep the initial investment to open a Kwench Juice Café under $100,000… almost unheard of in franchising. His fresh juice concept can adapt to a wide variety of locations in as little as 300 square feet. Too many franchise concepts require their franchise owners to take on massive debt before they even open their doors, says Gregoris. 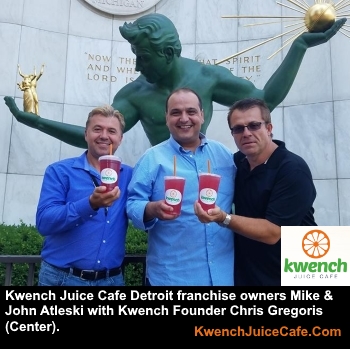 A fresh, healthy product is another key to success. Kwench juices and fresh fruit smoothies are made from locally sourced, organic ingredients and prepared to order within view of the customer. The look on the customer’s face on that first sip, says Gregoris, is one of the best perk of the job.

And the key to success that’s less visible but every bit as important is having the business procedures and systems fine-tuned, documented for easy and flawless execution. “My goal is to have the operation of a Kwench store simple and efficient enough that the owner, manager and crew is focused on pleasing each and every customer. That’s what builds customer loyalty and repeat business, and that’s what makes a Kwench Juice Café successful.”

Thirsty yet? You can enjoy a healthful, cold-pressed juice or natural smoothie at one of the independently owned franchise locations below.

No Kwench Juice Café in your market? Contact Chris Gregoris to discuss Kwench-ing your thirst for a fresh business opportunity today. 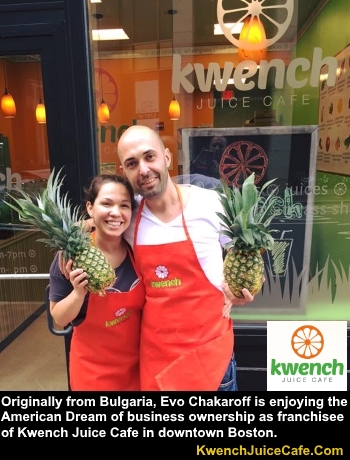